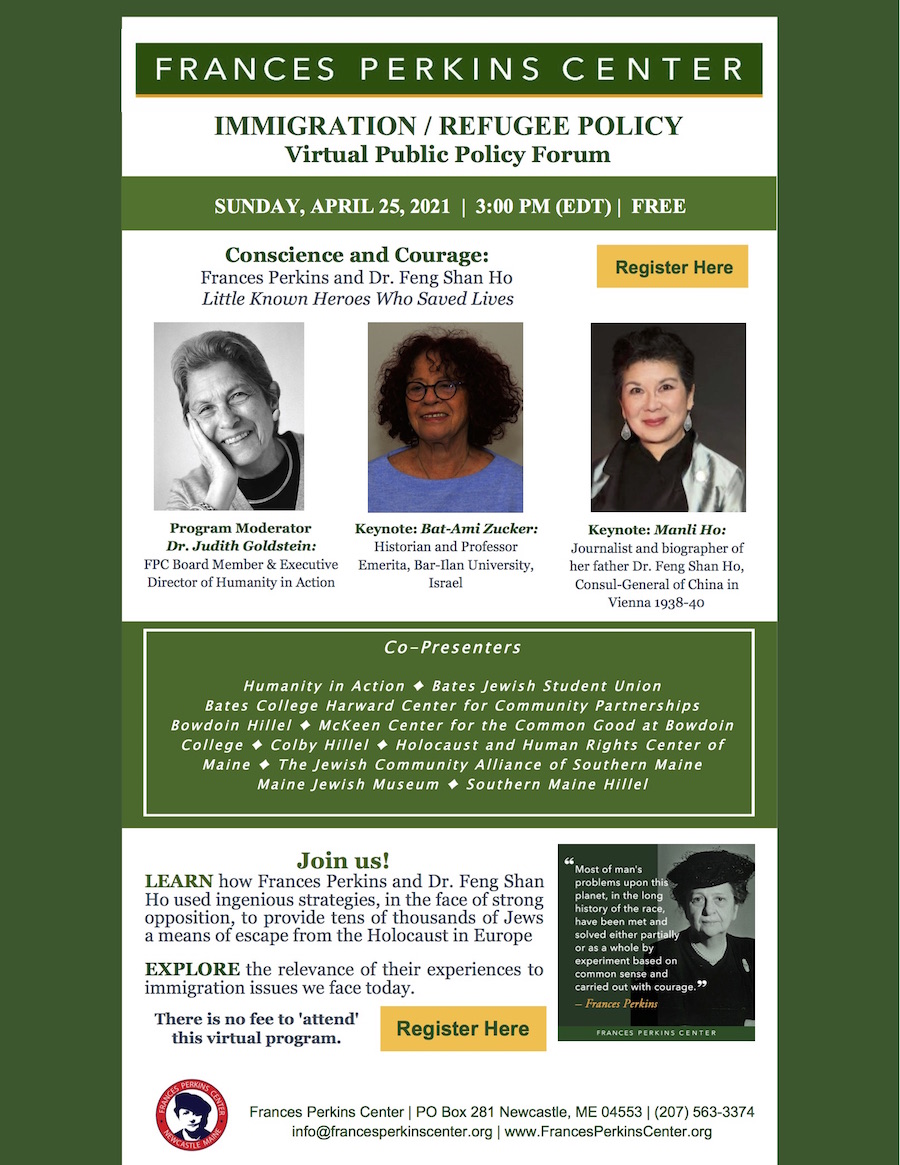 Bat-Ami Zucker, brings extensive scholarly research to her presentation about Frances Perkins’ courageous—and yet little known— advocacy role for permitting entry to the U.S. of Jewish immigrants escaping the Holocaust in Europe. As the U.S. Secretary of Labor, immigration policy was within her department. However, opposition to Jewish immigration was so strong, that in 1940 President Roosevelt transferred the Bureau of Immigration and Naturalization from the Department of Labor to the Department of Justice. Bat-Ami Zucker is a Senior Lecturer Emerita at Bar-Ilan University in Israel. Her books include United States Aid to Israel and its Reflection in the New York Times and the Washington Post 1948-1973 (published in 1991) and In Search of Refuge: Jews and Untied States Consuls in Nazi Germany (1933-1941 (published in 2000). She estimates that 20 –30,000 Jewish aliens who entered the U.S. between 1933 and 1940 on visitors’ permits eventually acquired citizenship, thanks to Perkins’ actions allowing such visitors to stay, despite strong State Department policies opposing this.

Manli Ho, an investigative journalist who has spent 15 years researching and documenting the actions of her father, Dr. Feng Shan Ho, one of the first foreign diplomats to save Jews from the Holocaust in Nazi-occupied Europe. Ho Feng-Shan was the consul-general in Vienna for the Republic of China, and the architect of a refuge of last resort for some 18,000 Jews in Shanghai. He risked his life and career to save Jews by issuing them visas, disobeying the instruction of his superiors. [See Ho Feng Shan: The “Chinese Schindler” who saved thousands of Jews.” ] Ho faced daunting obstacles: His home country had been occupied by the Japanese, and his home government was desperate to maintain Sino-German relations. His ingenious strategy involved issuing end destination visas to Shanghai, which required no papers or passports. Ho died in 1997 and his actions were recognized posthumously when the Israeli organization Had Vashem in 2000 awarded him the title “Righteous Among the Nations.” There is a memorial plaque dedicated to Dr. Feng Shan Ho at the Jewish Refugees Museum in Shanghai.

Following the speakers’ pre-recorded remarks, the moderator, Judith Goldstein, Executive Director of Humanity in Action, will lead a live session which will include speakers responding to questions from the audience.